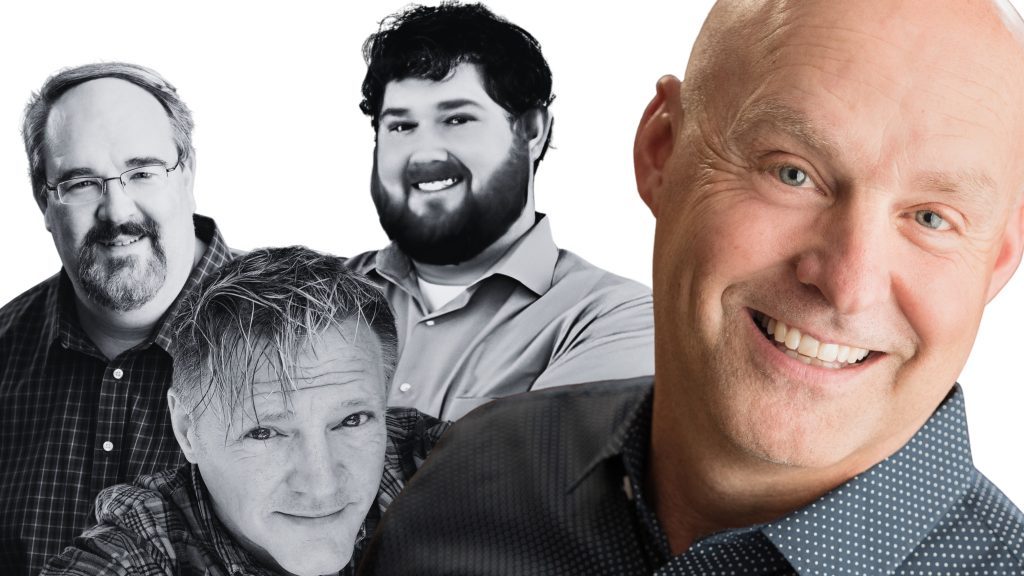 Role with The Missourians:
Baritone

Favorite Scripture:
Romans 8:28 – “All things work together for good to them that love the Lord.”
James 4:10 – “Humble yourselves before the Lord, and He will lift you up.”

Why:
We lost Caleb in a farm accident at the age of two and really experienced that God can pull you through some tough times. From that day on, Romans 8:28 has always been my power verse in the Bible. Although we don’t always understand God’s plan, it is promised that, “All things work together for good to them that love the Lord”.

How did you come to The Missourians:
I was singing with a trio called Brothers With Purpose when The Missourians called and asked me to fill the baritone spot for a few dates while they were searching for a full time vocalists. BWP was looking for a tenor at that time as well and God just seemed to be telling us that we needed to get together.

Past Singing History:
I grew up on a farm in a small town in Southeast Kansas. Raised in a Christian home and accepted the Lord as my Savior at the age of 7. From the time I was able to talk my parents encouraged me to sing and told stories of how I was always grabbing something to use as a microphone and standing on the fireplace hearth as my stage and singing my heart out. I Started singing in churches at a very early age. My dad, Jerry Wade sang in Southern Gospel Quartets so I grew up listening to that style of music. He took me to most of their concerts where I would sing during their programs. It was a great opportunity and an honor when I was invited to join his group and help carry on the family tradition.

My parents were always big supporters of my music and provided me every advantage to improve my God given talent. At 18 they gave me the chance to attend the Blackwood Brothers School of Music in Murray Kentucky where I was able to meet and learn from the best vocalists in the Southern Gospel Industry.

In the early 80’s while still in high school I joined The Revelations Quartet as their drummer. Later I was named lead singer and filled that role until the group disbanded in the mid 90’s due to health problems with Dad. When that group quit traveling I started doing more solo work.

In 1981 I entered and placed 2nd in a national talent search at the National Quartet Convention in Nashville, TN.

In 2005 I helped form a trio called “Brothers With Purpose” where I served as the lead vocalists. In late 2007 the group dissolved because of personnel changes.

God recently provided me with the opportunity to complete another solo project where many of the songs were recorded at the legendary Gaither Studios. It is like the Hall of Fame in the gospel music field. The title of the project is “Forever Changed”.

Interesting facts/stories about me:
In 1985 I married Diane, a girl from my hometown and over the next several years, we were blessed with three great children. Breanna, Caleb & Whitney. We are proud grandparents of seven wonderful grandkids Lane, Rylie, Emma, Jaci, Colton, Elijah and Ellie. Our youngest daughter Whitney looks to be the one to carry on the family tradition. Like her old man, she grew up singing in church and has developed a beautiful voice. In fact she is featured on a couple of songs on the “Forever Changed” cd. Whitney currently is a vocal music teacher in our hometown school system. Our granddaughter Rylie is also taking to music and singing. She is becoming quite the piano player and vocalist.

While with the Revelations I recorded 3 projects:
“Harvest Time”, “New Beginnings” & “Telegram from Heaven”.

My career dream is to someday sing for the Gaither Vocal Band.